Every year groups from all over the region compete for the first price in this carnaval parade.
And it’s bigger and better than you might expect from a carnaval parade in Blanes.
After all it’s just a small city, but it seems that the entire population come to the city center to watch this yearly event. 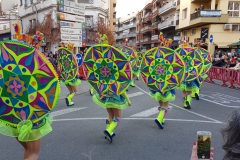 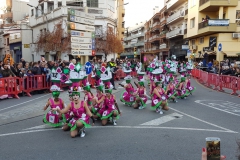 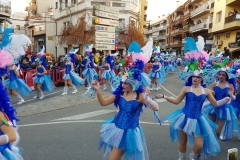 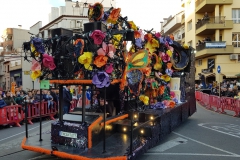 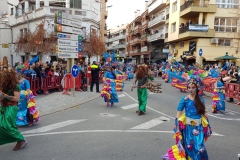 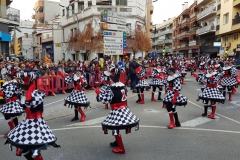 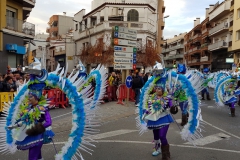 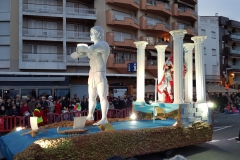 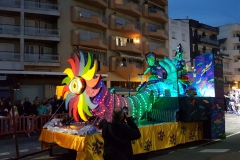 Every group is competing for the prestigious 1st price of “Rua del Carnestoltes”. The 1st price winners will receive a price of maximum €1.200.

They will be receiving point on originality, the most beautiful decorated vehicles, choreography, costumes and make up. And you can see they really do their best to win.

So, what can you expect?

Basically, groups dancing synchronized in the coolest outfits, guided by decorated and sound system carrying vehicles. I must say that although there is up-beat and especially loud dance music playing, the local crowd is relatively quiet. Also, they leave right after the parade is over because there is nothing organized for a after party on the streets. A wasted opportunity if you ask me.

So the best place to go after the parade is to one of these bars.

When and where is this parade?

Of course it’s being held during the week of carnaval. This parade is always on a Sunday and starts around 17:00.
The route of the parade may variate a little bit, but if you are on the main shopping street “Rambla de Joaquim Ruyra” you can be sure they will pass by in front of you.
I always like to stand on the high point of the roundabout as shown on the map below:

There are not so many tourists yet, because it so early in the season. If you happen to be around during carnaval, watching the parade is definitely something that I can recommend.
There is loud music, beautifully dressed people and bars are running at full capacity.

This website uses cookies to improve your experience while you navigate through the website. Out of these, the cookies that are categorized as necessary are stored on your browser as they are essential for the working of basic functionalities of the website. We also use third-party cookies that help us analyze and understand how you use this website. These cookies will be stored in your browser only with your consent. You also have the option to opt-out of these cookies. But opting out of some of these cookies may affect your browsing experience.
Necessary Always Enabled
Necessary cookies are absolutely essential for the website to function properly. This category only includes cookies that ensures basic functionalities and security features of the website. These cookies do not store any personal information.
Non-necessary
Any cookies that may not be particularly necessary for the website to function and is used specifically to collect user personal data via analytics, ads, other embedded contents are termed as non-necessary cookies. It is mandatory to procure user consent prior to running these cookies on your website.
SAVE & ACCEPT